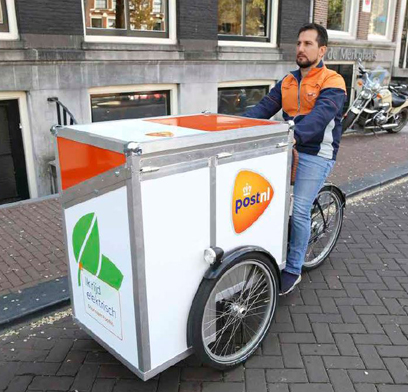 “By using the Descartes solution, route planning is executed automatically; it doesn’t give us much to worry about. We now notice that we can schedule more stops within various time windows. We will deploy the experience gained from using the solution in Amsterdam to implement the process in various other cities.”

PostNL is the Netherlands’ largest postal service company. One of the company's aims is sustainability; since 2017, PostNL has utilised electric delivery bikes to collect business mail and to deliver it along with parcels across the Dutch capital, Amsterdam. But they realised that it  would require a different way of routing planning for their cycle delvieries and the company turned to Descartes’ route planning system.

Focusing on sustainable transport, PostNL is aiming for emission-free deliveries in 25 inner cities by 2025. This started in Amsterdam, having its mail delivered by cargo bikes. Lodewijk Aandewiel, Logistics Designer at PostNL Bike Logistics said, “A one-way street may not apply to bicycles and across parks, so cycling is an option. The software we used, however, did not consider these options. Consequently, it did happen during the pilot phase that our city couriers arrived at a pick-up location too early.” It was time to tackle and improve the accuracy of our route planning.

PostNL needed new software suitable for planning bike routes. Following a selection process assessing various solutions, PostNL chose the Descartes solution. To facilitate PostNL requirements, Descartes implemented additional features in the routing software, such as specific cycle maps that showed bicycle bridges, not accessible by other vehicles, or prohibited routes that are however accessible by cyclists. Importantly, routes for bicycles and routes for vehicles can be combined and real-time traffic information added to the solution. Using simulation software, the schedules were adapted accordingly, including the various speed profiles for each type of vehicle.

Based on these results, the time spent per route was more accurately estimated. Aandewiel, PostNL's Logistics Designer was very pleased with the outcome. “By using the Descartes solution, route planning is executed automatically, based on the amount of routes and the required number of couriers. If necessary, planning can be adapted manually, but in essence, it doesn’t give us much to worry about. We now notice that we can schedule more stops within various time windows.”

At the time of writing, PostNL had around sixty electric vehicles on the road in Amsterdam. Aandewiel stated, “The implementation in Amsterdam is only a beginning; we will continue to reflect on the most efficient ways to implement this process in cities. We will deploy the experience gained in Amsterdam to implement the process in various other cities, such as Utrecht and Breda.”

PostNL is the number one listed postal service with the largest and most advanced network for letters, parcels, and e-commerce in the Benelux region. The company also operates in Germany and Italy and employs over 44,000 people in total. In 2017, turnover amounted to 3.5 billion euros.